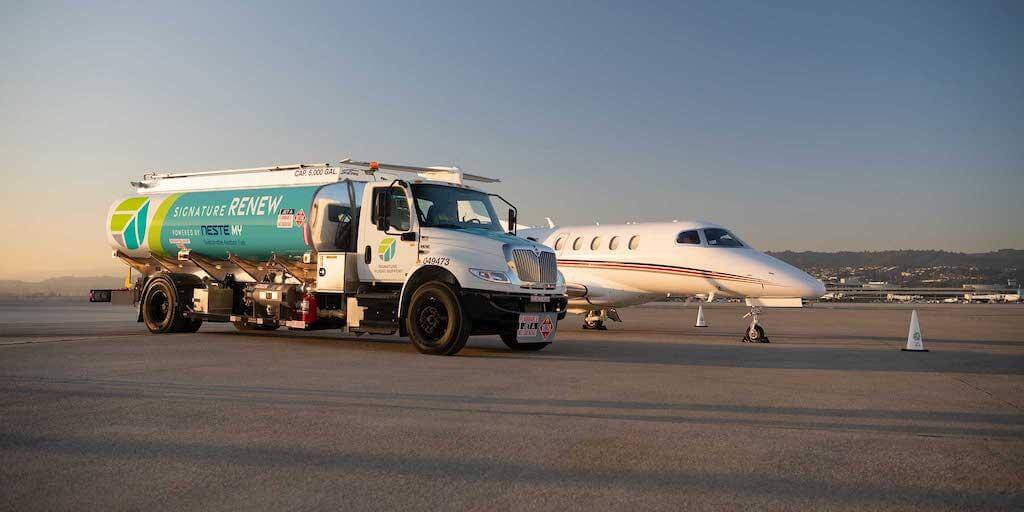 Responsibilities for a New World

Amsterdam, May 13th 2021–Sustainable Aviation Fuels (SAFs)—including biofuels—are made from a variety of raw materials including waste fats and oils, vegetable oils, wood chips or even household waste

But, as things stand, first-generation biofuels lack the sustainability that would make them a true game-changer. They remain expensive—two to five times more costly than conventional jet fuel19.

And then there’s the problem of scale. Today, SAFs constitute just 0.1% of global kerosene, and even the most optimistic estimates suggest that they could make up a mere 4 – 8% by 2035.

That said, between increased scale and production innovations, the widespread use of SAFs could be made viable.

While there are six certified kinds of SAF, Hydroprocessed Fatty Acid Esters and Free Fatty Acid (HEFA)—produced from used cooking oils, animal fats, and vegetable oils—is currently the cheapest and most commercially mature.

In the short- to medium-term, HEFA could be scaled up through better collection of waste fats and oils and by diverting raw vegetable oil from other uses. However, it’s still a long way from being able to meet the ever-rising demand for aviation fuel, and no SAF is currently approved for use at more than a 50% blend with conventional jet fuel.

In the longer term, we’ll need to develop more advanced production methods that make use of sustainable biomass, such as agricultural and forestry residues. In comparison to HEFA, such methods are relatively immature.

For example, the first commercial-scale plants designed to produce Sustainable Aviation Fuels using the Alcohol-to-Jetand Gasification/Fischer-Tropsch methods are only just reaching the planning or building stages, in many cases with a projected output of less than 0.1 metric tons per year. From there, the transition to multiple commercial plants will take at least a decade of project development, construction, and commissioning.

Meanwhile, less mature technologies that promise increased efficiency or make use of cheaper feedstocks—such as pyrolysisand hydrothermal liquefaction-—still have many production and investment hurdles to clear, and so are much further away from commercial viability.

In the longer term, we’ll need to develop more advanced production methods that make use of sustainable biomass, such as agricultural and forestry residues.

Beyond the six existing certified Sustainable Aviation Fuels, electrofuel—created by using renewable electricity to extract hydrogen from water and fuse it with carbon captured from the atmosphere—is another promising route. Since its “ingredients” are abundant, electrofuel could have the potential to meet all aviation fuel demand.

But if that potential is to be realised, significant R&D will be required to bring down the cost of equipment and improve the conversion efficiency that will, as things stand, create a prohibitively expensive form of fuel.

Despite all this, relative market readiness plus compatibility with existing technology makes SAFs the most promising low-carbon solution for long-haul aviation, at least in the short term.

And they’re set to receive a boost from new policy and regulatory commitments.

Many European countries are introducing SAF mandates and, as part of EU green deal, the ReFuelEU initiative21 has proposed to implement a blending mandate—which would see the imposition of a gradually increasing proportion of SAFs relative to conventional fuels—along with enhanced incentive and support mechanisms.

As we’ve seen, significant questions remain around how we might achieve truly sustainable air travel.

While we’re closest to a revolution in the short-haul space, 80% of emissions come from flights longer than 1500 km22; which, due to the energy density problem, will require liquid fuels for a long time to come.

And though SAFs and hydrogen are promising avenues of research, significant technological challenges lie ahead.

In the meantime, faster, more sustainable ground-based travel options, such as Hyperloop and maglev trains, are likely to be useful in bridging the carbon gap, as well as changing attitudes to reduce travel demand and boost sustainable tourism.

Since all problems are soluble given the right knowledge, sustainable aviation is only a matter of time.

Whether that time comes sooner or later will depend upon how we invest in the challenge.