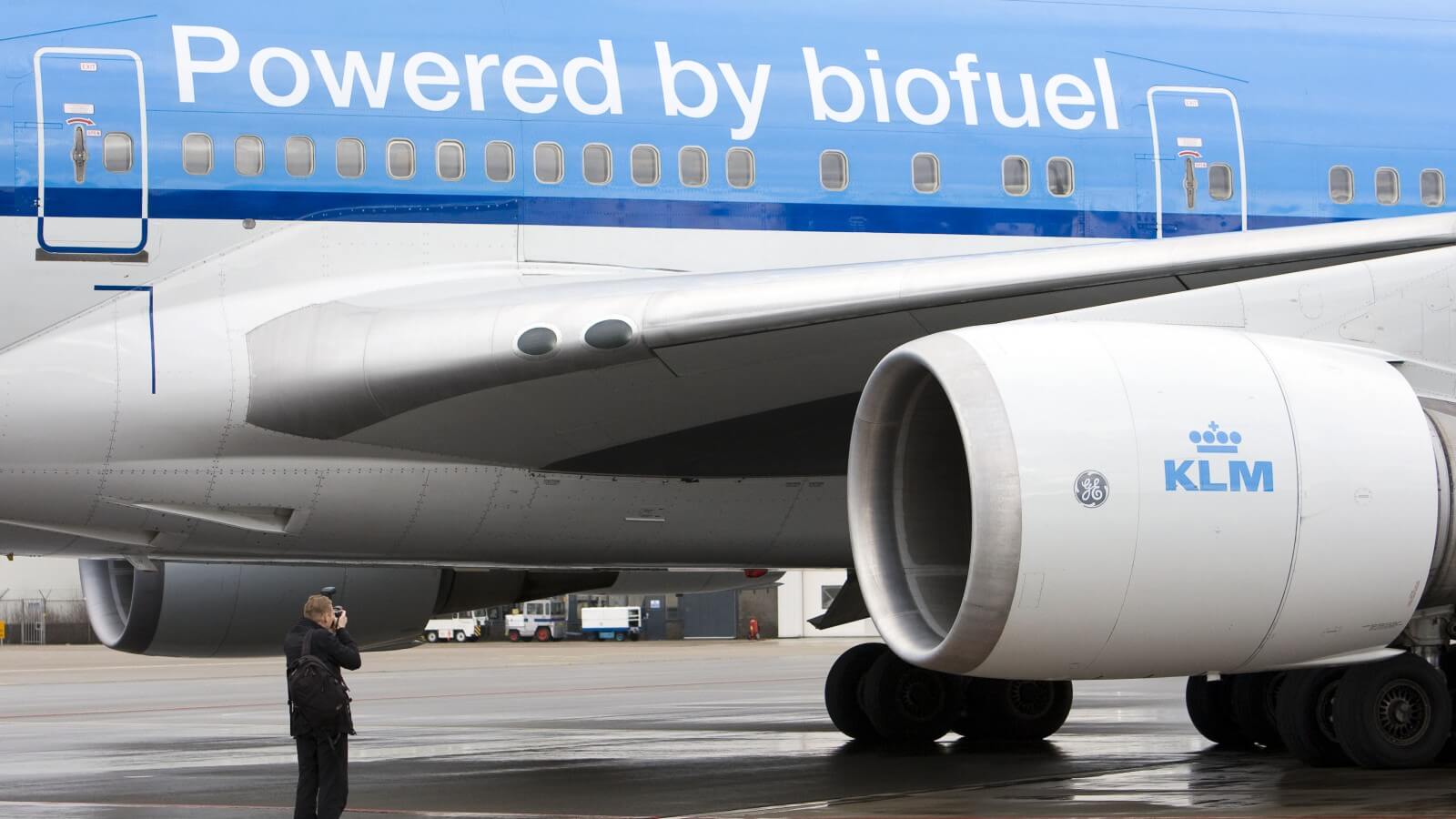 Amsterdam, 22 May 2021– You may soon be flying on used cooking oil from the snack bar to Gran Canaria. In Delfzijl, the Dutch company SkyNRG is building a factory that can convert waste vegetable fats and oils into a mixture of hydrocarbons that resembles fossil kerosene so much that it can be refueled on an airplane. Sustainable kerosene promises to combat global warming in two ways. CO2 emissions are lower.

And the combustion would also be cleaner. This creates fewer condensation trails that form clouds that block heat radiation. Experiments in Germany should show whether fewer ice crystals are indeed forming behind jet engines.

European aviation has decided to stop emitting CO2 by 2050. And Brazil?

That goal is feasible, but there is still a lot to be done, researchers from, among others, the Royal Netherlands Aerospace Center (NLR) recently wrote in the report Destination 2050.

Electrically powered aircraft are attractive for short distances – on green electricity, of course – and aircraft that fly on sustainably produced hydrogen.

But that technology is not yet mature, so in the coming years aviation will have to rely on sustainable fuels for CO2 savings, specifically variants of kerosene, but made from waste flows such as used French fries or pruning waste.

This biokerosene has been certified for use in existing aircraft engines since 2011. During combustion, CO2 is released into the air, but this is carbon that the plants had captured from the air during their lifetime.

Apart from emissions from transport and crop production, the use of this fuel does not release much extra CO2 into the air.

The processing of frying fat into kerosene does give some extra emissions. The producers of sustainable kerosene claim that the CO2 emissions of aircraft can be reduced by up to 85 percent. Sustainable kerosene is expensive Yet the use of biokerosene is not really taking off. At the moment airlines are already allowed to mix up to half of sustainable fuels with fossil kerosene, but in practice this hardly happens. Less than 1 percent of all the fuel that airplanes fly on worldwide comes from a sustainable source, says Elisabeth van der Sman of NLR, project leader of Destination 2050.

When the SkyNRG factory is ready next year, it will be the first European factory to use the so-called HEFA process (hydroprocessed esters and fatty acids) to make kerosene from used fats and oils.

There are various ways to make sustainable kerosene. Seven different production processes have now been approved; they deliver kerosene that meets all requirements for safe use in existing engines and infrastructure, says Eva van Mastbergen, Future Fuels project leader at SkyNRG. “HEFA is the most mature technology. Both the American factory and our factory in Delfzijl will use that route. ” In this process, waste fats and oils come into contact with hydrogen in a reactor under pressure and at an elevated temperature (a few hundred degrees Celsius), resulting in the formation of saturated fatty acids. By adding more hydrogen, a mixture of mostly branched hydrocarbons is created that is very similar to fossil kerosene.

Although a sustainable kerosene should resemble its fossil example as much as possible, there are small differences. It contains almost no sulfur, which is responsible for acid rain, and few aromatics.

The latter molecules produce particulate matter when fossil kerosene is burned. The use of sustainable kerosene is therefore a benefit for the environment, but the aromatics in regular, fossil kerosene also have a task: “The materials of the gaskets in the jet engine swell up due to these aromatics, which gives them their sealing function.

Among other things, in order not to disturb this sealing effect, alternative kerosene may only be mixed in up to 50 percent “, says Van Mastbergen. Samples in the air However, aviation wants to have modern aircraft fly on 100 percent sustainable kerosene, in order to achieve the emission targets by 2050. fetch. How a jet engine fares is currently being investigated in Germany. There, researchers from the DLR (the “German NLR”) are testing an Airbus A350-900, a large, modern airliner that flies on 100 percent biokerosene from the HEFA process. A small measuring plane flies in the back, which takes samples of the exhaust gases from the Airbus in the air.