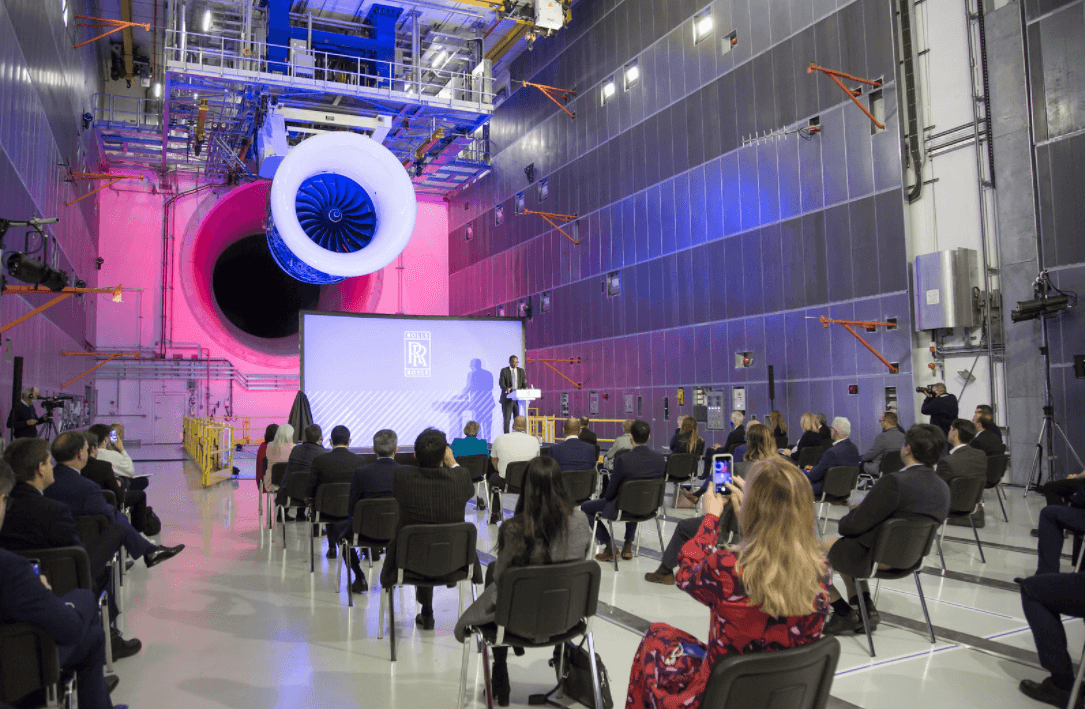 The test site, which is called Testbed 80, was designed to carry out tests on the most efficient aeronautical engines of today, as well as even more sustainable propulsion systems in the future.

Rolls-Royce, which is the world’s second-largest aero engine manufacturer, officially inaugurated the Testbed 80, the world’s largest and smartest indoor testing environment in the aerospace industry, at a ceremony with Rt Hon Kwasi Kwarteng, Secretary of State Department of Energy and Industrial Strategy Business, in Derby, United Kingdom.

According to Rolls-Royce, after almost three years since the beginning of its construction, the completion of a project of this magnitude is a milestone. The test site has an area of 7,500 m², which makes it comparatively larger than a Premiership football field. In total, over £ 90 million were invested.

The testbed 80, was designed in a different way, containing technologies and systems much more complex and capable than any other test site that Rolls-Royce have. The first test conducted at Derby in the UK happened earlier this year, and it was on a Rolls-Royce Trent XWB engine.

The testbed 80 project was developed to test a large variety of up-to-date engines, including the Trent XWB and Trent 1000, it also has the ability of testing the UltraFan® demonstrator. The project aims to develop even more efficient engines for the next generation, as well as hybrid or all-electric flight systems. The versatility of this new test site means that it is capable of accommodating engines of all sizes, up to 155 klbf of thrust, enough power to launch a Boeing 747 with a (huge) engine.

Following the successful completion of the first test using the brand-new Testbed 80 in mid-January 2021, Chris Cholerton, President of Rolls-Royce Civil Aerospace, said: “Today is an important landmark in our journey towards a more sustainable future for aerospace and aviation. Testbed 80 will not only test engines such as the Trent XWB – the world’s most efficient aero-engine in service – but also the engines and propulsion systems of the future, which will see us take another step towards decarbonisation. It’s great that the first engine test has been a success and we are looking forward to the official opening of the facility in the coming months.”

Paying attention on the environment, Testbed 80 will support all three pillars of the sustainability strategy.

First, continue to improve gas turbine efficiency. The facility was designed to test a range of up-to-date engines, including the Trent XWB and Trent 1000, but it will also have the ability to test the UltraFan® demonstrator, a design for the next generation of engines. The UltraFan will be 25% more efficient than the first Trent engine, tests are planned for 2022.

Second, Rolls-Royce is committed to promoting the use of Sustainable Aviation Fuels (SAFs), which can now be used as “drop-in” fuels in its existing engines, that is, there is no need for any modifications or change in the engine to make use of these fuels. The Testbed 80 was designed to support this commitment, being equipped with a 140,000 liters fuel tank for different types of fuel, including SAFs. Next year, there are also plans to conduct the first UltraFan demo test using 100% SAF.

Finally, in line with the ambition to be a pioneer in new and more sustainable technologies, the test site was designed to have the ability to test hybrid or fully electric flight systems.

Rolls-Royce CEO, Warren East, said: “Testbed 80 is the largest facility of its type in the world. However, it is not only big, it is also smart and features the most advanced testing technology we have ever used. As the new global hub of our testing capability, it will support the next stage of our UltraFan programme as we begin ground testing the first demonstrator in 2022. This incredible piece of infrastructure is a very visible sign of our commitment to this site and secures the future of Derby as the home of large engine development, continuing a history that began in the late 1960s with the RB211.”

Kwasi Kwarteng, Secretary of State for Business, Energy and Industrial Strategy said: “This testbed here in Derby shows that the UK remains a global leader in aeroengine technology. I’m proud that we’re supporting Rolls-Royce’s development of the highly-efficient UltraFan engine, as well as investment in green and cutting-edge aerospace technology here in the UK that will create high-skilled, well-paid jobs for decades to come. […] As the civil aviation market recovers, the innovation of great British companies such as Rolls-Royce and the entire aerospace sector are central to our plans to build back better from the pandemic and end our contribution to climate change by 2050.”

Rolls-Royce also commented that the company is pleased to have partnered with MDS Aero Support Corporation of Ottawa, Canada, for the design and construction of the new facility.